What is the scope of the problem?

In Massachusetts, almost 24% of high-school students reported using e-cigarettes, and nearly 50% have tried them at least once. More high school youth used e-cigarettes than all other tobacco products combined, and they used them nine times more often than adults.

E-cigarettes are a 2.5 billion dollar business in the United States. As of 2014, the e-cigarette industry spent $125 million a year to advertise their products and uses many of the techniques that made traditional cigarettes such a popular consumer product. 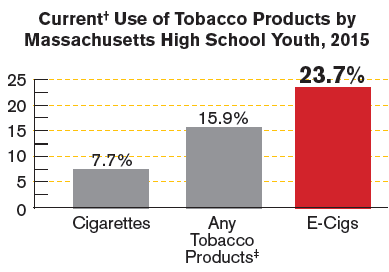 Vaping is the act of inhaling a vapor produced by an electronic vaporizer or e-cigarette.  E-cigarettes create an aerosol by using a battery to heat up liquid that usually contains nicotine, flavorings, and other additives. Users inhale this aerosol into their lungs.

The liquids that are vaporized come in many different flavors and often  smell fruity.   E-juice, also called e-liquid, is the primary material used in vaporizers, and consists of a PG (propylene glycol) and VG (vegetable glycerin) base, flavorings, and may or may not contain nicotine.  E-cigarettes come in over 8,000 different flavors including cinnamon roll, marshmallow, bubblegum, peach schnapps, java jolt, piña colada, lemonade, etc. Flavors are the leading reason that youth often begin using e-cigarettes.

Vaporizers can also be used to deliver cannabinoids such as marijuana,  other drugs,  and waxy concentrates and dry herbs. Different vaporizers support the vaping of different materials. For example, e-liquids vaporizers have a cartridge or tank, while a dry herb vaporizer will have a heating chamber. Multipurpose vaporizers allow the user to vape different materials simply by switching cartridges. Using a vaporizer rarely produces any smell (except perhaps a fruity odor associated with flavored e-juice) so it is often difficult to detect when and what a teen has been vaping.

Vaporizers/e-cigarettes come in all different shapes. Some common styles look like a thick pen, a stylus for an iPad, a flash drive, or a small flask with a round chimney coming off the top (see pictures).  The devices are very small and can easily be hidden on a person or blend in with normal backpack items.

What are the health risks of vaping?

¨ ultrafine particles that can be inhaled deep into the lungs

¨ flavorants such as diacetyl, a chemical linked to serious lung disease

¨ heavy metals, such as nickel, tin, and lead

No matter how it's delivered, nicotine is harmful for youth and young adults. Adolescent years are times of important brain development which begins in childhood and continues to about age 25. Nicotine exposure during adolescence and young adulthood can cause addiction and harm the developing brain. Youth and young adults are uniquely at risk for long-term, long-lasting effects of exposing their developing brains to nicotine. These risks include nicotine addiction, mood disorders, and permanent lowering of impulse control. Nicotine also changes the way synapses are formed, which can harm the parts of the brain that control attention and learning (U.S. Surgeon General 2016).

It is important to recognize that e-cigarettes and other vaping devices are not yet regulated by the US Food and Drug Administration (FDA), and the long-term health effects to users and bystanders are still unknown. Due to the lack of regulation, the chemical compounds in these device and e-liquids can vary between brands and do not have to be disclosed by manufacturers.

E-cigarette use among youth and young adults is strongly linked to the use of other tobacco products, such as regular cigarettes, cigars, hookah, and smokeless tobacco.

Some evidence suggests that e-cigarette use is linked to alcohol use and other substance use, such as marijuana. And certain e-cigarette products can be used to deliver other drugs like marijuana. (U.S. Surgeon General, 2016)

US Surgeon General: The Facts on e-cigarette use among youth and young adults

2016 Surgeon General's Report: E-Cigarette Use Among Youth and Young Adults

Vaping: What You Need to Know

How are e-cigarettes and vaping devices regulated in Concord?

It is important to recognize that the Board of Health prohibition on the sale of flavored tobacco and nicotine delivery products does not apply to Retail Tobacco Stores which are defined in the regulation as stores whose primary purpose is to sell tobacco products and tobacco paraphernalia, where the sale of other products is merely incidental, and in which the entry of persons under the age of 21 is prohibited at all times. So called  “Vape Shops” could be considered Retail Tobacco Stores (if the products sold contain nicotine) and as such would be allowed to sell flavored tobacco and nicotine products to persons over age 21.   No stores of this type are currently licensed in Concord.

Concord Public Schools policies prohibit the use of tobacco and nicotine products and the possession of vaping devices on school property.

Note that vaping devices and e-liquids can be readily purchased by youth from on-line retail sites. Buyers must only click a box  to state they are over 18 when purchasing products on these sites; no further verification of age is required for the sale to be completed. 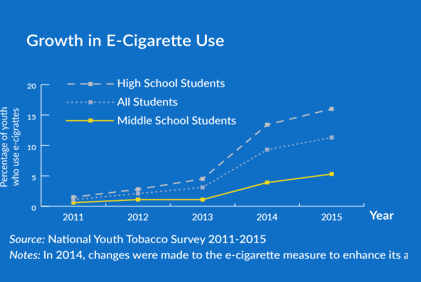 Other Information and Materials