Rapid growth continued during the early years of the decade, when the Light Board spent a considerable amount of time discussing new policies to accommodate the building boom. A discounted off-peak rate was established for home heating, as well as a policy for serving developments with roads not yet accepted by the town.

In 1960, the Light Board voted to ask the new Nashawtuc Country Club, Inc. for a deposit of $100 "as a guarantee of their electric account." As modernization continued, two-way radio equipment was acquired in 1961 for $7,401. That same year, an aerial bucket truck contract was awarded to the Hunt-Pierce Corporation for $14,814.10. 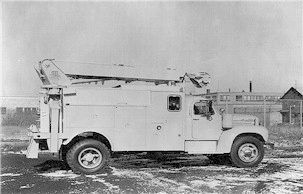 Electric use was booming in 1964, which allowed the Light Board to reduce rates by seven percent. Three years later, a 10 percent across-the-board rate cut was implemented.

There were frequent requests for additional street lighting as new streets were created throughout the town, and in 1965 the Light Board voted to install street lights on private ways, providing they are plowed by the Town. On February 9, 1967, new mercury vapor street lighting was voted for the business district in West Concord.

In order to serve the new residences and businesses, the electric distribution system was continually expanded and upgraded during the 1960s. Underground wiring was again a topic of discussion in 1966, when an Underground Wires Study Committee met with the Light Board to discuss the costs and relative merits of underground electrical construction.

The next year, the Board agreed to use $40,000 to establish an underground wiring fund and to add to the fund annually, subject to Town Meeting approval. A comprehensive plan for undergrounding the Town, showing areas and priorities in increments of $50,000, was begun in 1968. The same year, the Light Board voted to apply to the Select Board for a cable television license, which was subsequently granted, "in order to protect the Town’s interests."