A tall, perennial grass that can grow to over 15 feet in height. In North America, both native Phragmites and introduced subspecies are found. Introduced Phragmites forms dense stands that include both live stems and standing dead stems from previous year's growth. Leaves are elongated and typically 1 to 1.5 inches wide at their widest point. Flowers form bushy panicles in late July and August and are usually purple or golden in color. As seeds mature, the panicles begin to look “fluffy” due to the hairs on the seeds and they take on a grey sheen. Below ground, Phragmites forms a dense network of roots and rhizomes which can go down several feet in depth. The plant spreads horizontally by sending out rhizome runners that can grow 10 or more feet in a single growing season if conditions are optimal.

An individual plant can produce up to 1,000 seeds ever year that can be distributed by wind or waterways. Below ground, Phragmites forms a dense network of roots and rhizomes. The plant spreads horizontally by sending out rhizome runners that can grow 10 or more feet in a single growing season if conditions are optimal.

The plants high biomass blocks light to other plants and occupies all the growing space below ground so plant communities can turn into a Phragmites monoculture very quickly. Phragmites can spread both by seed dispersal and by vegetative spread via fragments of rhizomes that break off and are transported elsewhere. New populations of the introduced type may appear sparse for the first few years of growth but due to the plant's rapid growth rate, they will typically form a pure stand that chokes out other vegetation very quickly. There is a native species, Phragmites americanus, which closely resembles the invasive. Usually the native species co-exists with other wetland species and is found in undisturbed areas, where the introduced invasive species becomes a total monoculture, and is usually found in disturbed areas.

New stands of common reed can come about on soil that has recently been disturbed or polluted. Guarding against erosion, sedimentation, and run-off is the best long term solution for this invasive. Repeated mowing has found to be effective as well. Foliar spray is not recommended as it can be harmful to the surrounding floura and fauna. See the invasive removal page for how to carry out these methods. Any removal within 100 feet of wetland resource areas, including certified vernal pools, or within 200 feet of a perennial stream may require approval from the Concord Natural Resources Commission. Please contact the Division of Natural Resources before you begin.

The following native plants can serve as a good replacement to common reed in a garden: 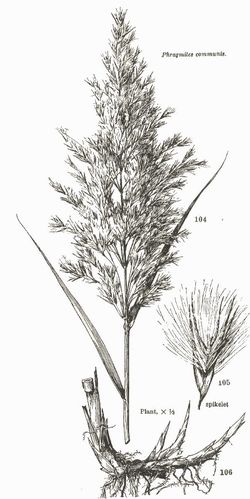