Japanese barberry was introduced to New England as an ornamental plant in 1875 in the form of seeds sent from Russia to the Arnold Arboretum. In 1896, barberry shrubs grown from these seeds were planted at the New York Botanic Garden. Japanese barberry was later promoted as a substitute for Common Barberry, Berberis vulgaris, which was planted by settlers for hedgerows, dye, and jam, and later found to be a host for the black stem grain rust. Because Japanese barberry has been cultivated for ornamental purposes for many years, a number of cultivars exist.

Japanese barberry is a dense, deciduous, spiny shrub that grows 2 to 8 feet high. The branches are brown, deeply grooved, and bear a single very sharp spine at each node. Leaf color ranges from blue-green to green to dark reddish-purple. Japanese Barberry prefers full sun to part shade but can reproduce and succeed in full shade conditions. The berries, bright red in coloring, mature late summer and early fall and persist into the winter. 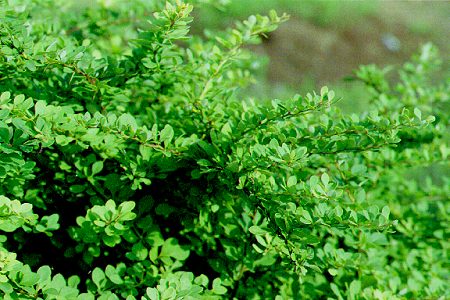 Barberry spreads by vegetative expansion as well as by seed, with an estimated 90% germination rate. Many birds also eat the seeds then bring them to new sites.

Once established in an area diversity decreases, creating a monoculture. Some stands become so thick that they can make natural barriers. Animals will avoid them and can no longer forage. White-tailed deer may avoid browsing on Japanese barberry, focusing more heavily on other species. This kind of feeding can give the barberry a competitive advantage because there are no native species to keep it in check. The plant also alters soil acidity and nitrogen levels, reducing the biological activity of native soils. 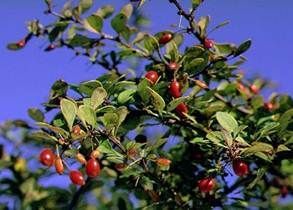 Hand pulling is acceptable for small saplings of this species, with mechanical removal and a "cut-and-dab" chemical treatment needed for larger bushes. A weed wrench would be good for this kind of plant. Hand pulling and using a shovel to remove plants up to about 3 foot high is effective if the root system is loosened up around the primary tap root first before digging out the whole plant. Use thick gloves as the plant has harmful spines. Make sure to bag all limbs that may contain berries to prevent the spread of the plant. Foliar spray is not recommended as it can be harmful to the surrounding floura and fauna. See the invasive removal page for how to carry out these methods. Any removal within 100 feet of wetland resource areas, including certified vernal pools, or within 200 feet of a perennial stream may require approval from the Concord Natural Resources Commission. Please contact the Division of Natural Resources before you begin.

The following native plants can serve as a good replacement to Japanese barberry in a garden: 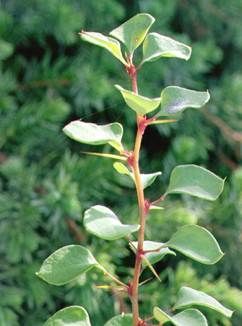